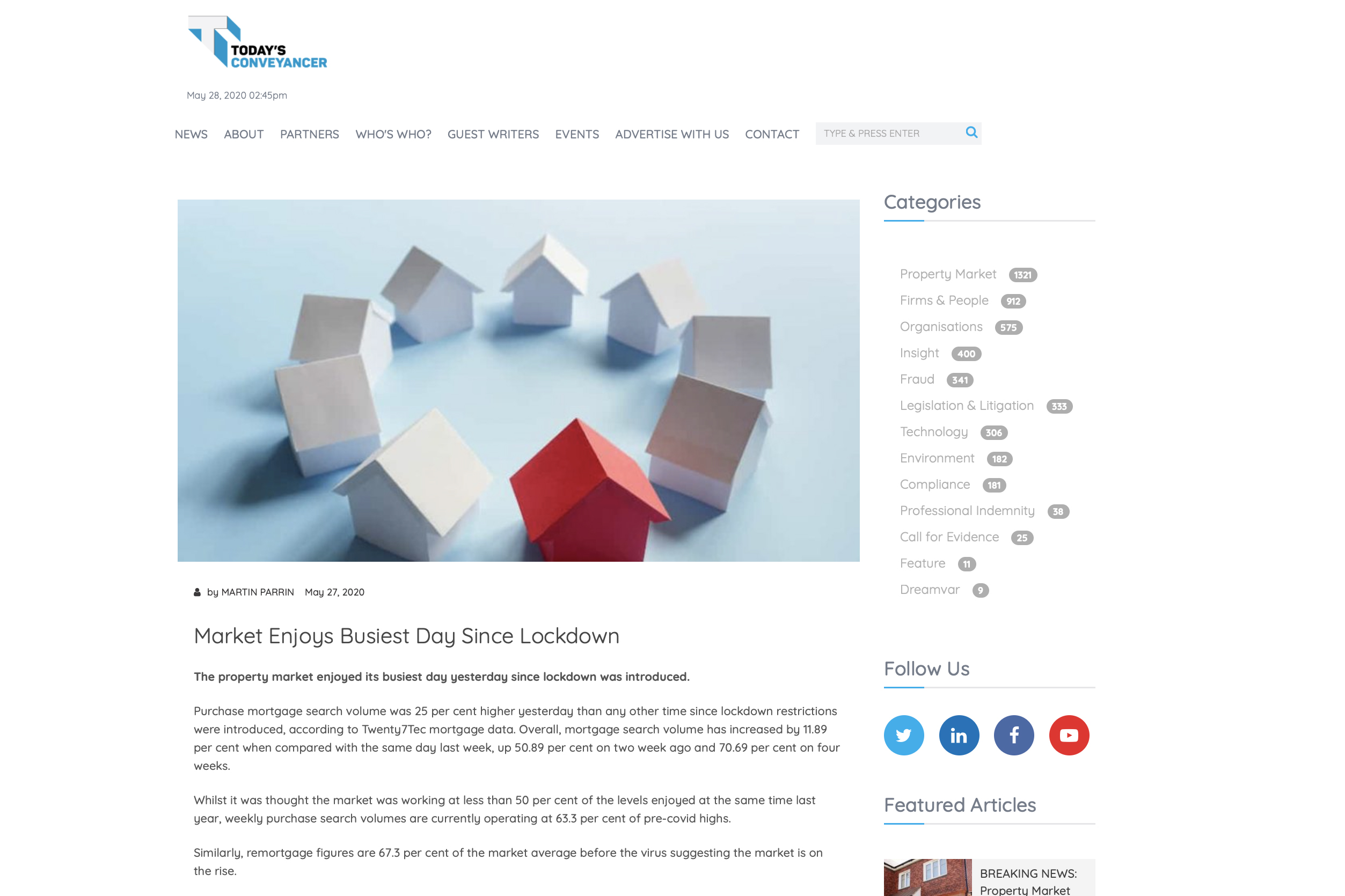 The property market enjoyed its busiest day yesterday since lockdown was introduced.

Whilst it was thought the market was working at less than 50 per cent of the levels enjoyed at the same time last year, weekly purchase search volumes are currently operating at 63.3 per cent of pre-covid highs.

Similarly, remortgage figures are 67.3 per cent of the market average before the virus suggesting the market is on the rise.

The volume of ESIS loans prepared last week have steadily increased since the lows of April; increasing by 8.9 per cent on the previous week, rising by 28.34 per cent on the levels recorded two weeks ago and climbed out of the doldrums by 43.24 per cent when compared with the dark times of a month ago.

However,  competing market data seems to suggest the spike in demand enjoyed as the market was released from lockdown has now peaked and enquiries are starting to plateau.

According to live chat sentiment recorded by Yomdel, new buyer enquiries had fallen by 2.35 per cent when compared to last week which enjoyed a meteoric rise of 67.13 per cent from its previous week.

However, new buyer enquires had increased week on week by 0.1 per cent on the huge gains (63.24 per cent increase) enjoyed last week.

Whilst demand has increased by 88 per cent since the lows recorded in lockdown at the start of April, sales agreed are yet to recover, according to Zoopla’s recent Index.

The pre-lockdown index point of 100 recorded on March 1 marked the equilibrium level. However, demand since lockdown has risen to over 120.

In contrast, sales agreed are still loitering at around 30. Zoopla claim, demand will take around two months to convert into sales agreed and completed transactions which could indicate the end of summer will be very busy.

However, for the time being at least, the market could face a brief lull between the blocked pipeline completing and new demand converting into tangible sales.

“The volumes for remortgage searches are edging back slightly, however. Yesterday’s figure was only the 66th best day this year and around 80% of daily highs in 2020.

“The bank holiday weekend will have pent up a little demand, so it’ll be interesting to see if momentum continues into tomorrow’s figures too.

“Buy to let searches form the lowest percentage of total searches since lockdown began as the market’s attention is increasingly turning to purchase mortgages.”

“Demand from home movers went through the roof a week ago when lockdown was eased, and the past week has seen those gains consolidate in the market. Enquiry levels remain at record levels.

“Customers are chomping at the bit and flooding digital channels with enquiries, with many requesting virtual viewings and valuations. In fact direct requests for video valuations via Yomdel Live Chat have shot up with almost 13% of vendors asking if it’s possible.

“There remain huge hurdles to estate agents, conveyancers, mortgage lenders and removers actually getting transactions completed and people moved. To make this happen people are going online and seeking immediate help via live chat in greater numbers than ever before.

“Interestingly, they are also signalling that they want technology to support them and are prepared to embrace virtual video valuations and viewings, and other arm’s length processes if it means they can start the process to move. These changes in consumer behaviour are not going away anytime soon.” 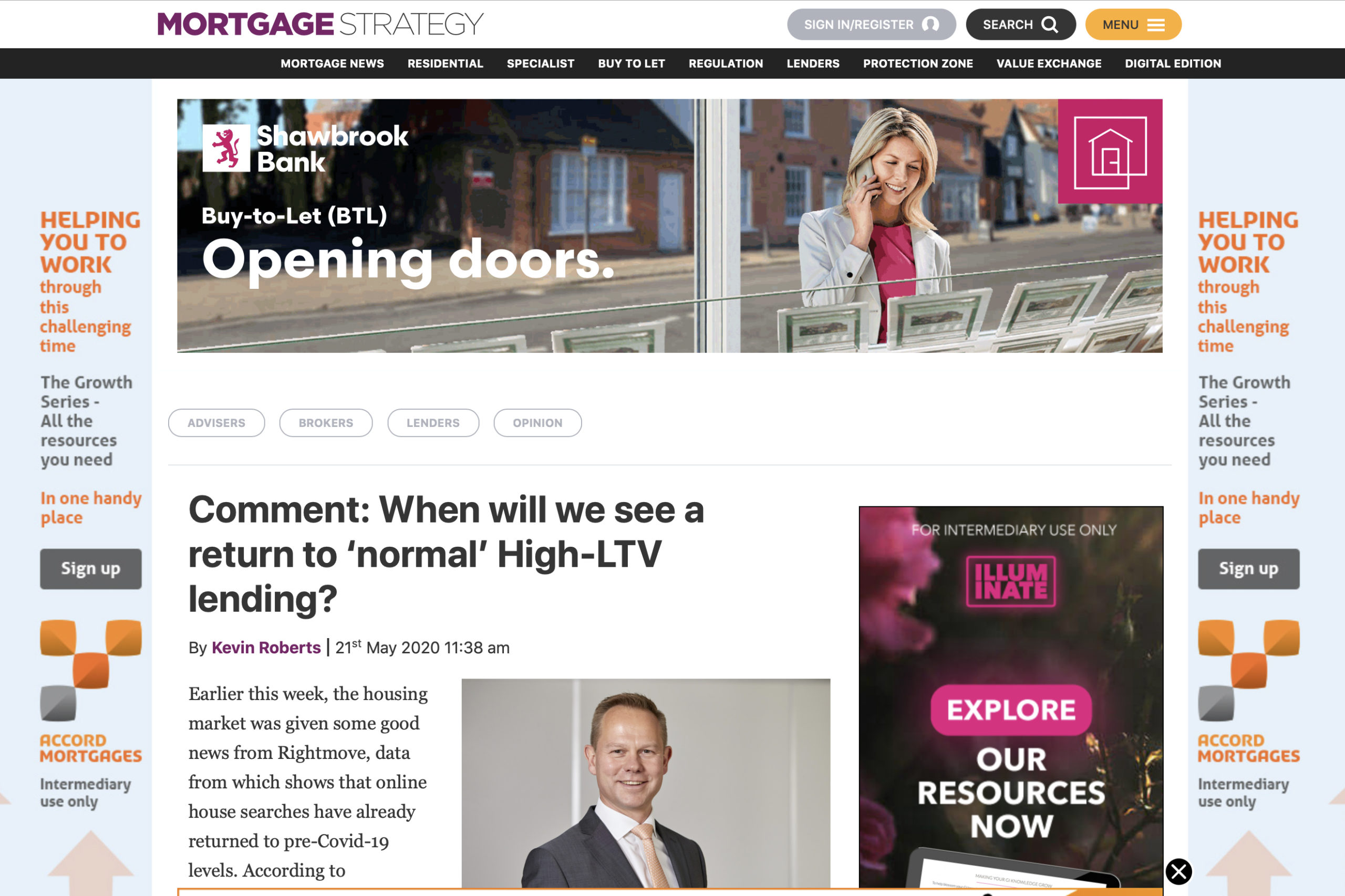 When will we see a return to ‘normal’ High-LTV lending?

Comment: When will we see a return to ‘normal’ High-LTV… 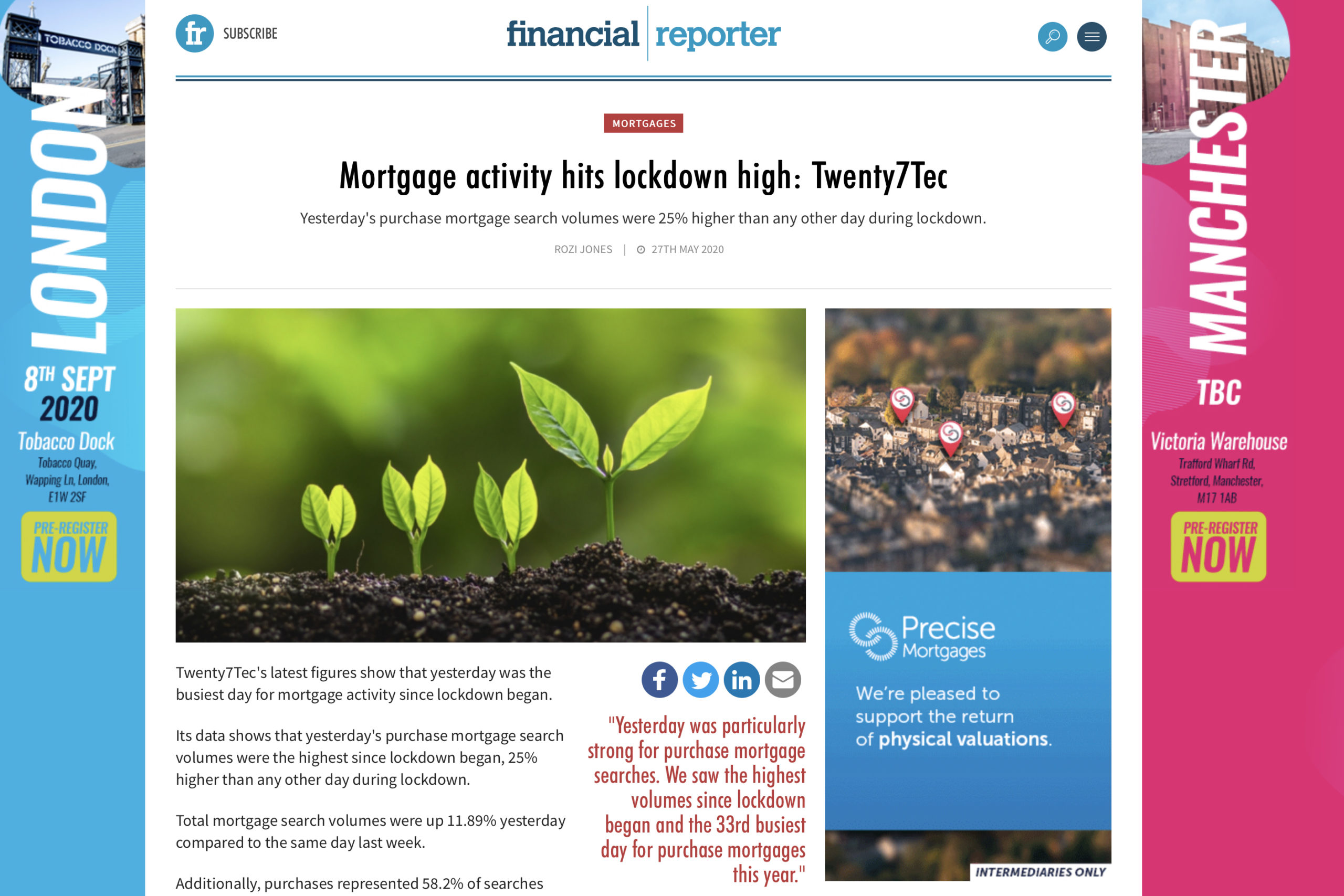